It's about more than just cuts

This post is too long for a tweet, but may be quite short for a blog. I just want to present an idea of a different perspective on the police cuts debate.

Overall, I am a supporter of cutting public expenditure; there is no alternative given the horrible state Messrs. Brown and Darling left us in. And I have some notion of equality which says that what needs to be done must be done without exception, the police included.

That said, I do not want to see policing quality reduced - I am not sure how far it can fall anyway whilst still being worthy of the name. I quite understand the associations, commentators and Opposition MPs seizing the opportunity from the last week's events to make a case for stopping the cuts but I have little faith they will succeed. Or at least there is a distinct opportunity that they won't.

Why not then also have a Plan B; using the same facts, the same public opinion and the same fear as to the future to campaign for something which might be much more achievable. That would be shifting the focus from palliatives to prosecutions, from counselling to conviction - indeed, using what became a dirty word in policing around 15 years ago, but one used in the House by David Cameron today, from Service back to Force.

This, I think, would include, but not be limited to:

I am sure there are many other measures which would help, these are rather off the cuff, but you get the idea.

Essentially, the Government, Opposition and certainly the public as a whole are asking for more robust policing. Those in the fortunate position of being able to lobby at this time should not be blinkered by the cuts. Concentrating solely on them gives the Associations the appearance of a Trades Union, concerned with the well-being of their members above all else. Police Officers are better than that; they should grab the chance to make a real difference to policing - and thus to the communities they serve - so that some lasting good can at least be born out of the terrible last few days.

Posted by Colin Sutton at 11:06 No comments: 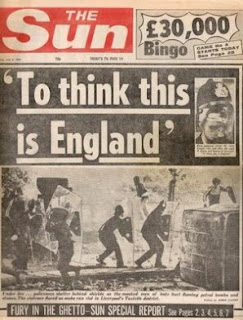 It was meant to be my long-weekend off as a young PC at Tottenham. It was July 1981. My leave was cancelled because the tough and unpopular measures necessary to correct the nation's financial plight caused by the previous Labour Government's mis-management had sparked riots. At least that was the official reason; to many it looked like opportunistic acquisitive crime. So perhaps there really is nothing new under the sun. But let's look back through my memories of that day in a little more detail.

At about 8pm, as the Grey-Green 52-seater - containing 20 or so coppers and an impressively gung-ho driver hired along with his vehicle - crossed the Seven Sisters Road by Finsbury Park Station we all heard the crash from our right. A set of step-ladders protruded from the smashed window of Unwin's off-licence in Station Place, and we could see at least half-a-dozen figures in the shop filling pockets and bags with spirits and cigarettes. But tonight was going to be different. The rioting which had continued across towns and cities for four or five days was about to stop. Whether it was pressure from their exhausted foot soldiers below, or their political masters (well, mistress ultimately) above, our leaders had instructed us to play harder, to meet force with force, to take any and every prisoner.

It wasn't pretty. Truncheons drawn, we entered and the resistance we encountered received some savage retaliation. Nine men were arrested; every stolen item - none of which had actually made it out of the store - was recovered and accompanied its thief. As the prisoners were loaded on to the coach they continued to struggle; officers continued to beat the futile resistance from them.

Shortly afterwards I sat in the charge room at Holloway Police station, taking personal details from my prisoner, a 30 year-old Jamaican whose name I remember to this day. He had lost his shoes, his shirt and the shape of his nose in the battle. He was bloody from head to toe, front and back. Though I knew I hadn't caused any of his numerous and very visible injuries, something in me wished I had. Despite having been enjoined never to tolerate any other officer touching my prisoner, I knew the situation - not just here, but across the country - needed extreme measures of such a nature that this young, inexperienced and essentially peaceable officer had neither the confidence nor the courage to effect. But I also knew how frightened I had been, for myself, for my colleagues and my city, and was intelligent enough to know that something had to be done.

Then every police officer in the crowded room stood up. I followed suit and saw a tall, impeccably smart man in the uniform of a Commander, cap on, swagger stick in hand. His gaze fell on my prisoner, I saw him take in every detail of the man's bloodied body. The Commander came over and asked, "Is this your prisoner, Son?" I almost simply nodded, but not wanting to add to my difficulties by being disrespectful, replied, "Yes, Sir" - as confidently as my sinking heart would let me. "Burglary, looting an off-licence" I added quickly, hoping rather than expecting that this would at least justify the arrest. He smiled just a little, placed his brown-gloved hand on my shoulder and said, "Well done, well done," with a warmth which was as welcome as it was unexpected.

The next morning it was a Saturday court at Highbury Corner. From the previous night's rioting there were 42 in-custody prisoners charged with burglary, theft, danage and assault. There was one Stipendary Magistrate, who cleared the whole list in slightly over 90 minutes. My man was typical in that he pleaded guilty and was immediately sentenced to a couple of months imprisonment. No social enquiry reports, no adjournment for the Probation Service to interview him, just go to jail. Get off our streets, all of you, if you cannot behave - that was the unmistakeable message. The tide had turned, the community was fighting back, through those appointed and paid to protect them, and protect them we did. Violence was met with violence and crimes, all crimes, were met with prosecution and swift justice. The belief was that the rioters, quite simply, didn't want a fight and didn't want to go to prison.

Sadly, it is evident that neither of these dissuading factors is easily available to our officers today. First, watch the helicopter footage on the TV. Watch how ponderous the police response seems to be, waiting until the the 'dynamic risk assessment' allows action. Wait for the shields, the crash hats, the Tasers. A much-respected Commander in the 1990s used to conclude briefings saying, "The Metropolitan Police is into participative management, but it has no place in a public order situation". Where we once had quick decisive and instinctive leadership we now have decision by committee, by numbers and manuals, slow, cautious decisions made by managers scared stiff of being second-guessed after the event.

Secondly, as we have seen in other public disorder situations, notwithstanding the seriousness of the circumstances, the Police cannot offer violence back now without an uproar, an IPCC inquiry, a trial even. CCTV, mobile phone videos and 24 hour news will all be available to those who have an agenda to prevent the police taking the necessary robust action. The masked men and women, and more especially those who support them as a matter of principle, insist anonymity cuts only one way, and they disseminate their knowledge so usefully as evidenced by this London flyer.

But most significantly perhaps, our over-sophisticated, defendant-biassed, lawyer-enriching and victim-neglecting Criminal Justice System just cannot move with the speed the situation demands. A CPS lawyer, cautious to adhere to the myriad rules and guidance - laid down by those who professed to be tough on crime - will need statements, forensics, further enquiries and a 'realistic prospect of conviction' . This will require our rioter to be released on bail pending further enquiries - provided of course that the lawmakers and law-interpreters have decided that Police can bail suspects after all - before any charge is laid. The rioter will of course have Legal Aid, and almost certainly be advised not to plead guilty at he first appearance. I doubt the court would deal with four cases in 90 minutes, let alone 40.

So, combine an over-stretched, under-funded and under-trained Police Service with politicised, partial scrutiny on an unprecedented scale, mix in an excessively bureaucratic and risk-averse CPS and put it all within the context of our 21st century risk-assessing, H&S worshipping, backside-covering police leadership and what do we get? 215 rioters arrested, almost 90% of them not charged. A teenage rampage with police powerless to prevent them, powerless to control them and clueless as to how to regain the streets for the communities they claim to serve.